Sticking to a healthy diet in a nutrient-poor culture can be difficult—so difficult, in fact, that most people attempting this feat won’t manage to accomplish it despite their best efforts.

You may struggle in your efforts to consistently make healthy food choices. I know I did.

Years ago, after reaching yet another low point in my food addiction cycle, I determined, in desperation, that I would put to use my fear of embarrassment by making a public proclamation regarding my eating behavior.

I began by writing a list of about eight retailers from whom I regularly purchased my chocolate and baked goods, and I visited them all with this message: From here forward, I, Caroline Israel, will no longer purchase [chocolate item] from you.

Of course, I’d give a little more explanation, but that was the gist.

My first visit was to a locally-owned bakery on the other side of town from which I regularly purchased fresh-baked cinnamon rolls. I was nervous pulling into the parking lot and fervently hoped to be the only customer.

Upon ordering what I hoped to be my final cinnamon roll, I stood to the side waiting while the attendant bagged my purchase. The yeasty scent of many loaves baking teased my nostrils, prompting me to ask myself, “Are you sure you wanna do this?” But before I could backtrack, the barista stepped forward and placed the warm evil-doer into my hands.

I looked her in the eyes and declared, “I’m a food addict, and I need to make a pact with you. You don’t have to do anything but listen. This is the last cinnamon roll I’ll be buying from here. Also, I will not purchase any cookies, other sweets, or bread.”

I thanked her for listening and then left, relieved to have completed my unnerving mission and proud that I had followed through.

I made the same proclamation at my most-frequented natural foods store. That one was harder because I recognized many of the employees and was embarrassed to admit that my problem was so out-of-hand that I had to take this drastic action.

That first confessional announcement at the bakery marked the beginning of a 9-month period of complete abstinence from things sweet or bready, and it was the true start of my path to healing.

Still, it was a year and a half of on-again-off-again before I began following a nutrient-dense diet style. You see, I had the desire to eat healthy and had largely escaped the sugar addiction, but I lacked the psychological tools necessary to make the change more quickly and easily. (See Plan, Plan, Plan and Stop, Look, and Listen)

A public proclamation doesn’t have to involve a supermarket or bakery. You can utilize this strategy at a restaurant by telling your dinner companions what your meal plan is for the evening. This works because humans like to appear consistent to other humans, and the public proclamation takes advantage of this innate susceptibility to social pressure

If you think these actions are too drastic, tell me, which of these is more drastic—making a very public pronouncement about your intention (thus risking falling on your face) or having to undergo open-heart surgery? What’s more extreme, vowing to do away with the unhealthy foods or having a diabetes-induced foot amputation?

Make the public proclamation when you’re feeling strong—it won’t work if you wait until you’re craving unhealthy foods, because you won’t do it then. Also, it’s best to tell someone who supports you and won’t poo poo your efforts to eat well. Finally, this technique alone won’t solve your eating problems, but when you combine it with other strategies like weighing and measuring and eating while seated, you greatly increase your chances of being one of the lucky few to successfully adopt a nutrient-dense, healthy diet for the long haul. 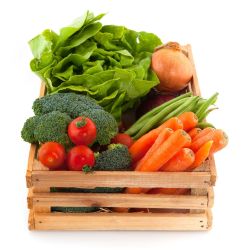